Festive Gonks … Super cute, but what are they? 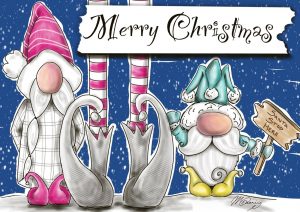 Hands down, I LOVE a festive Gonk, I think they are just such charming little characters! I’ve even begun designing and illustrating my own Gonk Christmas cards, and as all my illustrations have their own little story, it got me thinking: what exactly is a Gonk and where did they come from?

Firstly, their true home is up for debate, with various folklore tales stating it could be a forest near the North Pole, Greenland or Lapland … but maybe some things are best kept secret.

However, I can tell you that they originate from Scandinavian folklore, dating from around the 17th century, and are commonly referred to as ‘Nisse’ meaning ‘dear little relative’. They were often described as looking like little old men with big fluffy beards, although some stories say they could shape-shift to appear human, among other things, so maybe not always so tiny!

The consistent theme running through those original tales is that they would live in the barn of a farm and ‘secretly’ use their magical powers to act as protector of the farm and livestock, sometimes helping with farming chores too. 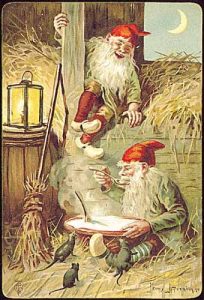 The popularity of the Nisse grew more so around the 1800s when they became associated with Christmas, helping to deliver presents. At this time, Swedish artist Jenny Nyström painted the Nisse, depicting them with iconic red hats and white beards, and this reinforced the idea of them belonging to the festive season.

It seems the gnome/Santa-like features of these charming little creatures have captured our hearts and imaginations for some time. With further adaptations and creative licence, we now see so much beard and hat, all that’s visible of their face is their cute round nose! They can be found in an array of colours and patterns, and yet they remain instantly recognisable.

So lastly, why do we call them Gonks? Honestly, I have googled my heart out and the only connection I have found is to the furry little gonks that became popular in the UK and America in the 1960s. A round furry body with googly eyes, sitting on a flat disc. 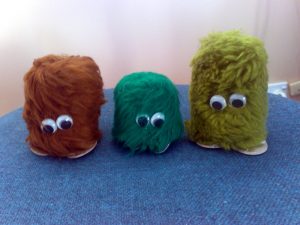 You can still get them today and they make very cute collectables. All I can think is that the festive Gonks are small and similarly furry given the amount of beard-to-body ratio, and so the name has simply crossed over. (If you have any other explanations, please let me know.)

So, there we have it, that’s the story behind the Gonks we know and love today – not an elf, not Santa – but just as magical and a very welcome addition to Santa’s team of helpers!